The Hacky Holidays “Space Race” 2021 CTF challenges ran between July 2 and July 26. I took part and finished in 64th place. Here is a quick overview of most of the challenges I completed:

This challenge consisted of the following flag image and a link to a flag designer. I was told to copy the flag to gain admin access. 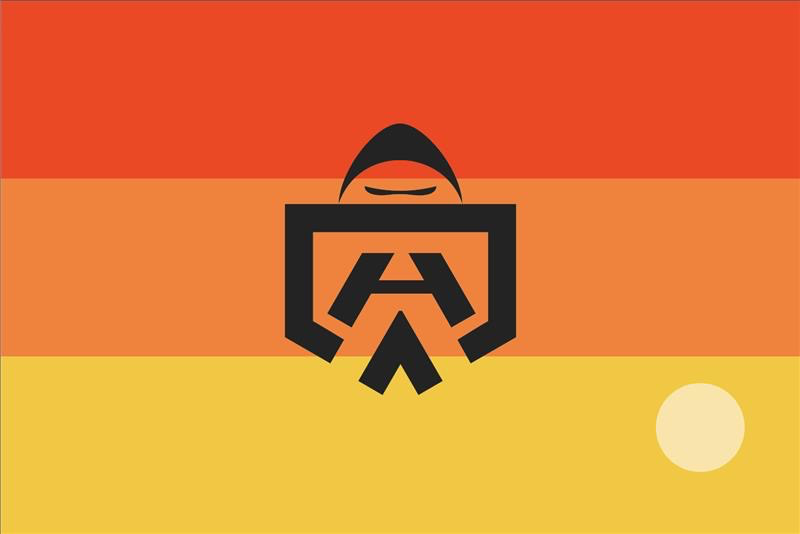 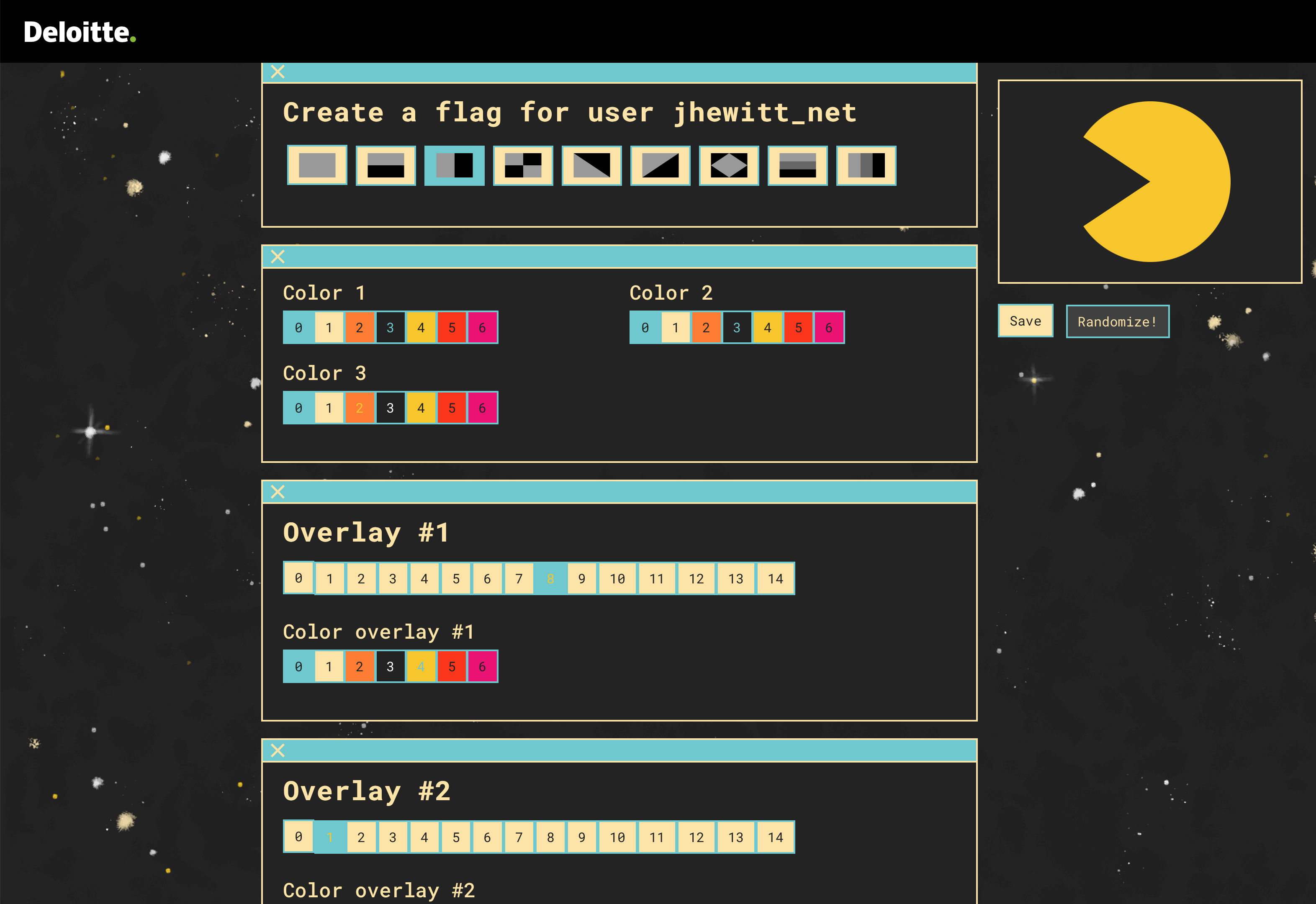 The flag designer had multiple choice options for generating a flag. Upon changing any of the options, a new flag image would be loaded from a remote URL where the path was influenced by your choices. Eg, it may be /1/2/3/4.svg if you chose those options. I used the web interface to copy the admin flag as best as I could but the image in the centre of the flag was missing from the options so couldn't be copied.

I solved the challenge by opening the flag image URL in a browser and manually changing the numbers in the path. I could see that most numbers were already correct because they were controlling the background colour and various shapes on the flag which I had already successfully copied manually with the web interface. One of the numbers controlled the overlay which I was missing and by using a number greater than what the UI allowed me to use, I gained access to the flag.

“Bow shock is an amazing phenomenon, but you better not get too close… Can you find out how to minimize bow shock and prevent everything from turning into dust?”

This challenge included a .jar file which I uploaded to https://jdec.app which then showed me some easy-to-read code.

This code shows that the flag is CTF{bows0ckd_ appended with the value of totalInput. I could see that totalInput was being incremented on each execution of getInput() by the user-submitted value which this function requests. The function “main” shows getInput() being called 3 times and with the value the user is expected to enter (333, 942, 142). I added those 3 numbers together, appended to the flag string, and got the correct flag.

I could see that the user input would be split into 3 parts, the first part should be “UFO” followed by base64-encoded “UFO” (“VUZP”) followed by the sum of “U”,“F”,“O” character codes, all separated by dashes.

The challenge webpage has a “forgotten password” page. I used the “about us” page to find a username belonging to an admin, then performed a password reset. The password reset form asked for my hometown as a security question. I looked on the LinkedIn profile of the owner of the username and found their hometown was Bourtange. The password reset page then just spat out the raw password “fataborgana42”. I attempted to log in with these credentials and was given “Login success! No member functionality implemented for now :) Have a flag instead: CTF{fataborgana42}”

“Find the answers to the treasure hunt to gain access to the cake in the space cafe.”

Roten to the core

“You find a roten apple next to a piece of paper with 13 circles on and some text. What's the message?”

I recognised this as ROT13 and the “roten apple” was a good clue too. rot13.com is a decent website for converting it.

“You find a page with a roman insignia at the top with some text what could it mean?”

The references to romans immediately made me think of the Caesar Cipher so I used my go-to website for this kind of thing: https://www.dcode.fr/caesar-cipher which quickly gave me the answer.

The space station that rocked

“You hear the heavy base line of 64 speakers from the next compartment. you walk in and the song changes to writing's on the wall, there is some strange code painted on the wall what could it mean?”

I recognised this as base64 and decoded it with https://www.base64decode.org

What the beep is that?

“You hear beeps on the radio, maybe someone is trying to communicate? Flag format: CTF:XXXXXX”

“You are now in the space cafe, the cake is in the container that should not be here. You can see random names on all the containers. What will Docker never name a container? Note: Please enter it as ctf{full_name}”

I spent a while reading Docker documentation to determine if there are any reserved names but couldn't find anything which seemed like it could be the flag. Eventually I just googled “what will Docker never name a container” and found this page: https://medium.com/peptr/why-boring-wozniak-will-never-be-generated-as-a-container-name-in-docker-763b755f9e2a

“They ate then cake and left a note with a secret algorithm to unlock the cake treasury. We saw it happening at exactly January 1, 2030 11:23:45 AM… are you the visionary that can figure out the PIN code? PIN code generation algorithm:”

I initially got the pin code wrong so I attempted to offset the epoch value by multiples of 3600 in both directions in case it was a time zone issue. Eventually I realised the problem was because I had compiled my code on MacOS instead of Linux. Once compiled on Linux, my code worked on the first try using 1893497025 as the epoch. I also mistakenly wrapped the pin in CTF{} for a few attempts which slowed me down even more.

“We've seen an Unidentifi3d Flying Object passing by. It was created on one of the universe's most advanced printers.”

“The UFO was forged on one of the universe's most advanced printers - do you know which make and model? Enter the answer as Make Model.”

This challenge consisted of a .gcode file. I simply looked through this file in a hex editor for a 3D printer model/make. I found one near the end of the file which I used for the flag.

“Do you know how GCode files work? Maybe you can find a hidden message along the layers. Flag format: CTF{answer}”

I used https://gcode.ws to “view” the file. I used the 2D viewer and adjusted the view so I could scroll through various layers. Eventually some text became visible which was the flag.

“Our gallery with Rover images is beautiful - we had a lot more available, but we had to make a selection of which ones we added to the public gallery.”

This challenge page consisted of a gallery page which featured multiple images, the hint indicates we are looking for an image not included in the HTML. Each image had a URL like this: “/Home/Image?file=2.png” where each image had a different number. I manually checked for additional images by increasing the number in the URL bar until I found a “hidden” image at “/Home/Image?file=22.png”.

“Do you hear the motor of the rover revving?”

During the first challenge, I suspected an LFI (local file inclusion) vulnerability and confirmed it by visiting “/Home/Image?file=/etc/issue”. I did some research into “revving” so I could figure out what the clue was telling me and I found this page which documents an LFI vulnerability in a WordPress plugin: https://blog.sucuri.net/2014/09/slider-revolution-plugin-critical-vulnerability-being-exploited.html

I had also discovered this web application was running on .net due to the .net anti-CSRF cookies being set on the “subscribe” page which was an important piece of the puzzle. This Microsoft Docs page indicates that a .dll file will be created named after the project. Using this information, I was able to download a file called “Rover.dll” which I then decompiled using ILSpy which was able to show me a flag which was included in the binary.

“A very famous person has subscribed to our gallery updates. Can you find out their mail address so we can send some fan mail?”

The subscribe page accepts an email address but is vulnerable to SQL injection. As shown in the decompiled DLL, email address validation is being performed server side meaning that only addresses which are valid can be passed to the SQL server.

I solved this challenge by visiting /Home/Image?file=/var/lib/mysql/ibdata1 which gave me the MySQL server data file; I used “strings” to easily find the email address.

“The agency who created the space ship has included some subliminal advertising. Can you find out what their secret message is? Flag format: CTF{hex}”

This challenge consisted of a large animated png. The default “preview” application on MacOS splits out each frame so they can all be inspected manually. I noticed a flag written in a tiny font on a single frame; it took a while to correctly read because of the font they used.

This challenge consisted of a web page asking the user to log in. A drop down box was included for the “Realm”; when looking at the HTML it became clear this dropdown box was simply changing an IP address which was being sent to the server. I changed the IP to something random and received the message “Can't contact LDAP server” when attempting to login.

To solve this challenge, I spun up a new DigitalOcean VPS running Ubuntu 20 and installed an LDAP server like so:

I submitted the form again but with my DigitalOcean IP address and saw the following packet when running tcpdump on the VPS:

The following part is important: cn=admin,dc=space,dc=corp

I then ran dpkg-reconfigure slapd which allowed me to configure a domain and a password.

I submitted the form again and was given a flag. I used “admin” and “password” for the credentials and used “space.corp” as the domain.

“What sort of OS and kernel is the actor using? Give us the kernel release version (the output of the 'uname -r' command).”

I ran “strings” on the memdump and grepped for “Linux”. I found this line:

I used strings and grep again in an attempt to find the shadow file. I found this quite quickly:

The flag is the unhashed password and the “$y$” part indicates yescrypt is in use which means less software supports brute forcing it. Eventually I discovered how to tell John The Ripper to brute force scrypt (–format=crypt) and got the password.

I knew the IP address of the network share thanks to the pcap which this challenge included. I used strings and grep to find references to it (using the -C flag so I could also see surrounding lines) and eventually found “Administrator” was the network share username. I then grepped for “Administrator” with 50 surrounding lines shown and then grepped that for “password”. I found a block of text which included the share IP, the username, “org.gnome.keyring.NetworkPassword”, and “JUPITER” which I initially thought was the password. 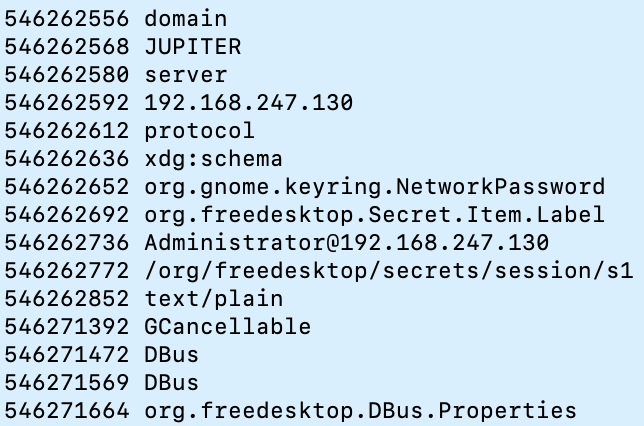 I then went to this section in a hex editor so I could look around. I found “Shuttle9812983” a few lines up which was the password. 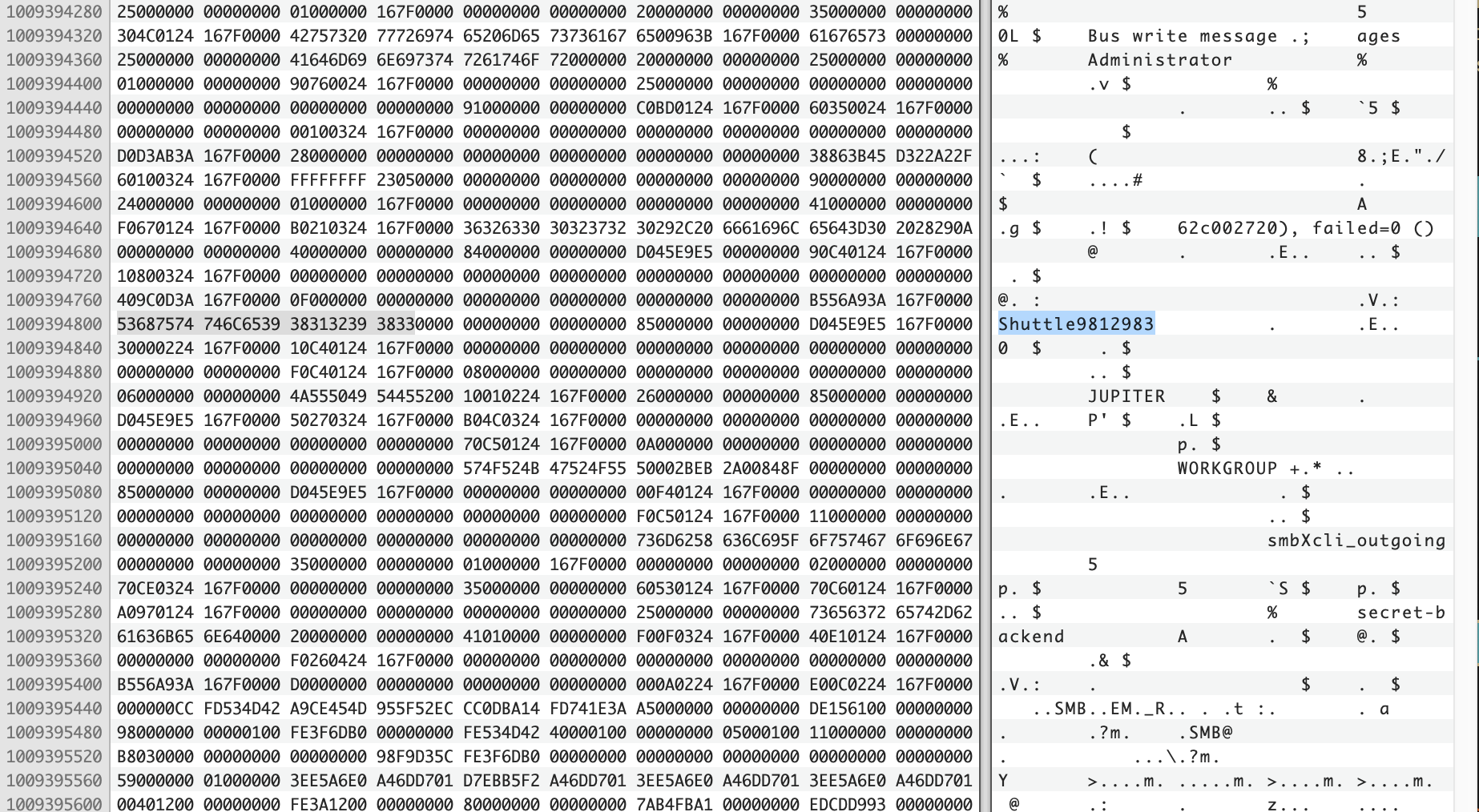 I completed the challenge “Skylark Capsule” and made a separate page for my writeup. This page was used as an entry into the “best writeup” challenge but did not win.

My writeup can be accessed here: Skylark Capsule CTF Challenge

I have included a screenshot of the scoreboard showing the top 100 players. A total of 1036 players solved at least one challenge.